Scary stuff stands out: things that are threatening to you seem to have a special saliency. You notice them more often than other things, and you might find it hard to focus on anything else. Imagine you just saw the film Eight Legged Freaks, and now you are faced with a house spider in your bedroom: When you walked in, you immediately noticed that freak, and now you can’t keep your eyes of it. This is what we psychologists tend to call an attentional bias, in this case towards spiders, but you will also have it to other threatening (real or imagined) things.

A very prominent idea in the current scientific literature, is that of the direct route of threatening visual information. The logic is a bit like this: Normally, visual information is processed mostly in the occipital lobe at the back of your head, which receives information from your eyes through the thalamus (specifically the lateral geniculate nucleus of the thalamus, or LGN for friends). However, another neuronal path from the eyes leads through the superior colliculus, a super-interesting area that is thought to be heavily involved in directing your attention and your eye movements. A crucial point here, is that the superior colliculus also connects (via the pulvinar) to the amygdala, an area that is often associated with the processing of fear. (Note: The amygdala has also been associated with nearly every other emotion, and a handful of other things such as your sexual or political orientation, but let’s forget about that for now.) So, goes the reasoning, if the eyes are more or less directly connected to the amygdala, that’s a much more direct way for visual information to travel to the ‘fear centre‘. Remember: the other way is from the eyes, to the back of your head, then along your skull (via the ventral and dorsal routes), via some more detours, and eventually some of the processed visual information will reach the amygdala. The route via the superior colliculus has been labelled the direct route, and the route through the visual system in the occipital lobe has been named the indirect route.

At this point, you might be wondering why we have this elaborate visual system at all, if information could just bypass it and still be processed. Well, you see, we need it to know what it exactly is that we are looking at. The direct route is thought to be a quick-and-dirty way of making a little bit of sense of your environment (“a threat might be present”), whereas the visual system will actually tell you what precisely is going on (“there is a spider on your pillow”). The visual system really is the only place where accurate vision is constructed (that’s why they call it the visual system!). The idea some people base on this, is that there might not quite be a ‘direct route’ of visual processing at all. They think that visual information is processed in the occipital lobe, and that subcortical areas (such as the amygdala) can guide what information is prioritised.

A number of studies have reported quicker processing of threatening information, but the stimuli used in those studies has always been relevant to the task. That is, people always had to attend to and process the threatening stimulus, and then do something with it (move their eyes to or from it, or judge it in one way or the other). This is a problem, because it stimulates people to adopt strategies that prioritise the task-relevant (and incidentally threatening) stimuli. A mental strategy that prioritises information is what we call top-down attention: You consciously guide your attention to the stimuli that you want to focus on.

The opposite, which is crucial to the current scientific ideas on attentional biases to threat, is bottom-up attention. This involves an automatic process: Whenever something threatening appears, it automatically grasps your attention.

Crucially, when I write about ‘us’ and ‘we’, I mean Manon Mulckhuyse and myself. And by that I mean Manon did most of the work, and I could happily tag along.

As attention researchers, we love eye movements. Seriously, eye movements are absolutely fantastic. They are quick, they are very closely tied to your attention. In general, where your attention goes is where your eyes go. And they are incredibly quick: You can move your eyes to a suddenly appearing stimulus in 150 ms, whereas a hand movement would be at least twice as long (and usually about four times, or even slower). So, in order to test the quick attentional effects of threatening stimuli, we really want to look at people’s eye movements.

In this experiment, we ask people to look at a circle of simple, grey circles. Each of them has a little plus in it. At some point, almost the pluses suddenly disappear, but one remains visible. The idea is that participants move their eyes to that plus as quick as possible. Crucially, sometimes another circle (green or red) appears when the pluses disappear. People get distracted by this extra circle, and sometimes accidentally make an eye movement towards that instead of towards the plus. 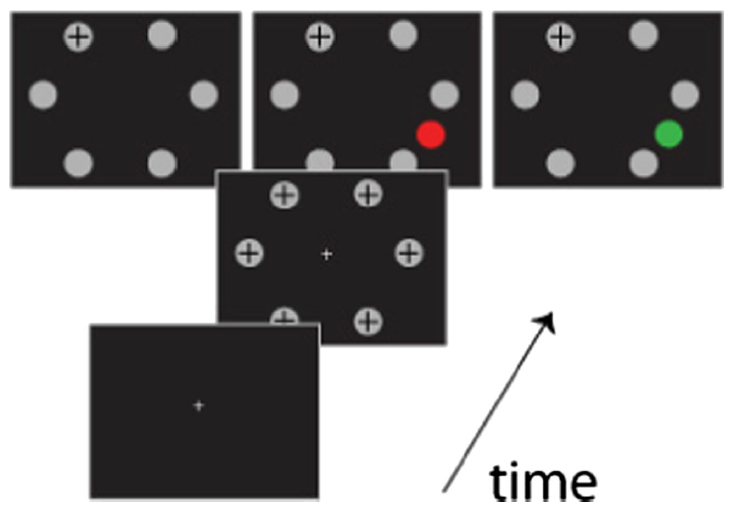 The different screens in each trial in our experiment.

By now you might realise our trick: the red and green distracting circles that appeared during the task were still associated with the aversive sounds. (Throughout the experiment, we occasionally played the loud noise, just to reinforce the association between the coloured circle and the aversive sound.) The coloured circle that was associated with the sound is what we call the CS+, and the other is what we call the CS-.

More eye movements towards the threat

First of all, it’s important to check whether participants actually felt a bit threatened by the loud noise. This was the case: people indicated that they felt more anxious during the experiment. In addition, they were very good at learning the association between one colour and the aversive noise. They were also more threatened by the coloured circle that was paired with the loud noise than by the coloured circle that was safe. (This was all tested using response scales and statistics; see the paper for the precise methods.) 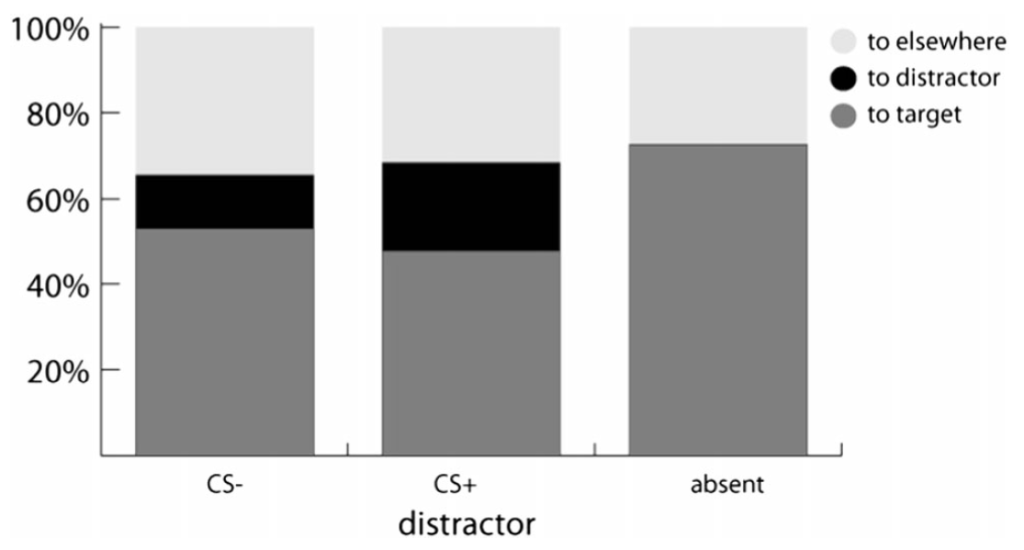 Slower disengagement from the threat